I’ve been meaning to write this post for some time, mainly to explain my disappointment at a number of “supposedly enlightened citizens” lack of ability to understand why “all lives matter” is so important whilst they bang their drum for Black Lives Matter/save the planet/free the whale or whatever the latest “bandwagon” to jump on is. This was mainly prompted by my disbelief at the stupidity of an “all houses matter” meme that’s been going round social media etc. The lack of understanding shown by some in this area simply defies belief etc. Of course, the downside for me in writing it is I will no doubt be branded fascist or far right or whatever and I’m not sure I can be bothered with the grief you know? But hey ho here we are.

Ok so you’ve all seen the “Black Lives Matter” protestors (I suppose it made a change from EU remoaners protests or Extinction Rebellion p*ssing everyone off in Central London). Here we go: 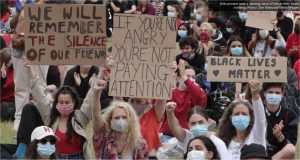 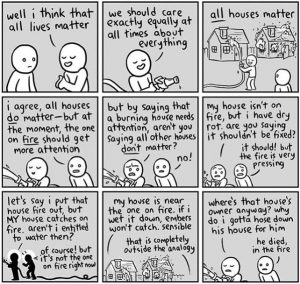 So I am going to explain this clearly as to why in fact all lives DO matter, well the vast majority of them at least. Let’s assume the fire brigade turns up to put out that fire and the house on fire represents racism and hey presto they put it out. Well, that’s fine and dandy IF it’s the only house on fire but it isn’t is it? The reality is if each house is a different discrimination/prejudice then the fire brigade would turn up and most of the street would be on fire not just one house. One house might well be racism, but one is sexism, one is homophobia, one is ageism, one is uglyism (seriously I don’t know the word for prejudice based on aesthetics) and so and so on.

Loads of people are discriminated against, constantly, day in and day out and I don’t see anyone campaigning for them, do you? And if anyone is campaigning for them, there’s not very many of them. Now I don’t want to make this about me but I am going to give some of my own experiences as an example. Until 2009 I was the Managing Director of a somewhat successful group of companies loosely trading under one parent company and selling products online, not Amazon level for sure but still not so bad. Due to circumstances beyond my control (a chain reaction started by the demise of Woolworths and a company it owned called Entertainment UK) the companies had to be liquidated/put into administration. It hit me hard but I didn’t anticipate the resistance and sheer obnoxiousness of what was to follow.

I figured that as a former project manager/consultant for two leading UK consultancy firms and a Managing Director for a .com I would at least be able to find a job. But no, I met a constant stream of problems and disappointments which basically came down to discrimination and prejudice primarily based on age. See, thing is I am “old” for my industry, think I’m “seeing things”? For obvious reasons (I don’t want to end up in court) I can’t go into details but I’ve seen and heard plenty of evidence that my age was clearly the issue. The final “evidence” was then I started putting my date of birth on my CV deliberately, the calls from recruiters stopped almost instantly, well “imagine my surprise”, it works brilliantly as a “time waster filter”.

Anyway, I digress. The point I am getting at is the vast majority of us are discriminated against in one form or another, be it colour, sex, gender, age, appearance, disability or whatever. So turn up to that street and virtually every damn house is on fire. Ergo, it’s a dumb stupid meme, biased to Black Lives Matter’s “cause”.

So what’s the solution? Stop sectioning off discrimination, stop making it about racism or sexism (let’s face it those are the two we hear the most about, closely followed by homophobia). If you want to give a damn about people then give a damn about people in general, whatever their colour or sex etc. Tackle discrimination in general and not just one part of it, because (whether it be right or wrong is irrelevant) if all you do is tackle racism then all you’re going to get is “but what about ….”

Care about people, care about each other, aspire to equality of opportunity. Stop being a “concerned citizen” sheep and jumping on the latest “cause” to protest about. Strive for equality of opportunity and a better life for every person who is discriminated against. In other words, let’s put out all those damn fires, not just the racism one.

PS I am aware equality of opportunity isn’t necessarily ideal BUT it’s a damn sight better than what we generally have now.

One thought on “Why it should be “All Lives Matter””